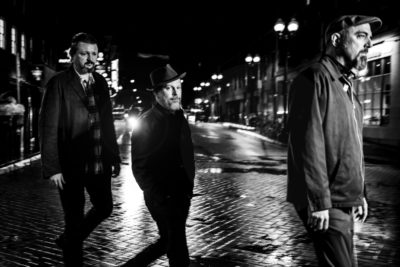 A chance encounter between low rocker Colley and a street singer has coalesced into a creative partnership breathing new life into the genre created by Morphine. Struck by a busking blues band while on tour in New Orleans, Colley stopped, listened, and grabbed his Polaroid to capture a couple of moments, leaving a snapshot in the guitar case along with a tip. Years later, well after the tragic passing of Morphine front-man Mark Sandman after a fatal heart attack onstage in 1999 and Lyons’s relocation to Boston following hurricane Katrina, Lyons and Colley were introduced by mutual friends and began collaborating informally. They soon discovered the photo of Lyons and his street band pasted into one of Dana’s tour journals, along with a detailed description of the band. Years later, Jeremy discovered that he had the matching Polaroid to the one in Dana’s journal amongst the few of his photos that survived Katrina’s flooding.

Lyons, Colley and Deupree jammed and played some small bar gigs, but they never touched a Morphine song until 2009 when invited to perform at the Nel Nome Del Rock festival in Italy; the scene of Morphine’s last gig. The response cemented the trio’s bond & Vapors of Morphine was born.

Vapors of Morphine honours Mark Sandman’s legacy by blazing musical paths in new directions. A restless spirit, Sandman headed several bands in different styles, some of which shine through Vapors. The influence of Southern American music is heard in Lyons’s swamp-tinged treatment of traditional songs. Colley’s processed saxophone — testing the upper limits of low rock and blurring the line between wind instrument and electric guitar — continues the Morphine tradition of sonic exploration. And the group’s arrangements of African guitar music bring to mind the variety of world music one experiences walking around the multicultural Central Square, Cambridge, where there is a corner named for Mark Sandman. All of this was on full display in their 2015 release A New Low.

Vapors of Morphine October 2021 East Coast tour to be confirmed in July 2021 and Europe plus Russia to follow.