View cart “Jack Adaptor “No Logos”” has been added to your cart.

A studio in Notting Hill, London, Mr. Cordoba is up in the control room mixing “Everything Is Free”. It’s a big mix, a crazy mix,that is going to take all day. Mr Frederick is down in the vocal booth doing the lead singing for “The Summer Of George”. Every now and then he pops upstairs to listen to the work going on in the mixing room: he always gives two thumbs-up. Next day, Mr Frederick comes upstairs from working on another lead vocal, this time for “Pop Music”.

What’s this? he asks. This is new, right?

Just cooked it up, Mr Clark says, what do you think?

I love it, Mr Frederick says, it’s amazing, let me sing on it!

See what you can do with it. Mr Clark says, got any lyrics going?

Mr Frederick hurries down into his basement lair, listens again: it’s beautiful, he gets out his notebook, finds the right words, sings them. Next day, they mix “No Logos”. The first single! It goes on like this week after week. These boys are song machines. Singers, cellists, drummers, scratchers and piano players come in and bump up the sound. Mr Frederick sings the songs. Mr. Cordoba plays the guitars, keyboards, and bass, does the backing vocals, takes the occasional lead vocal. And he’s producing the session too!

Where does it comes from, this dedication to music?

From Gene Clark, Todd Rundgren, Prince, Yo La Tengo, that’s where. From a love of Miles Davis and Charlie Mingus, the Eels and the Beach Boys. From soul, country, pop, rock, from all genres and none. From a love of rock music and being tired of rock music. From wanting to make records that are different, different to other records, the LPs you get these days which are just one idea rehashed 12 times. From wanting to make records full of surprises – from song to song and within songs. Classic records that are modern without resorting to the trends or gimmicks of any given time. Wanting to stretch, not limit, the imagination.

Where did they come from?

From writing songs together for 8 years, hundreds of songs, from a relationship that goes beyond just being songwriters. Mr Frederick and Mr. Cordoba met through a mutual friend neither of them can remember. They both love The Show About Nothing, south coast sport, Joe R. Lansdale, Richard Ford and Annie Proulx, a good roast dinner. Mr Frederick served his rock apprenticeship with the ahead-of-it’s-time band The Family Cat, UK Top 50 singles and all, later splitting the group to form a new band with Mr. Cordoba, releasing a radio-friendly, play-listed single “Here Come The Millionaires”, (now a collector’s item due to a pulping error at the distributor’s end) as Pure Grain. Fierce Panda also released their “Sweetest Song” on a 45, “Cry Me A Liver”.
But the songwriting took over and the studio became their obsession. Jack Adaptor became the focus of all their energies. In the studio they recorded enough material for 4 LPs. Musically eclectic and adventurous, they planned each record to be different to the next. Lyrically, Mr Frederick explores the modern world with his cynical and entertaining eye for detail. Inspired by American fiction and the tough joys of life in London, his characters discuss with us modern topics such as thwarted ambition, fear of failure, fear of work, fear of the very young, consumerism, ex-girlfriends on holiday, gameshow hosts, unfulfilled travel plans, sexual frustration. “I’m a pessimistic optimist,” he says. “I try to have one good joke in every song” he says, “even in the really dark ones.”

What about live shows?

Jack Adaptor just played some shows with Maximo Park in Germany, they are going to do a European tour May 2005…for details please contact us.

What’s next?
The first single from the self titeled album is “No Logos”, a full blast of melody and attitude plus a crisp shortened Phil Vinall remix, who made his mark with production and mixes for Placebo, Radiohead etc. The second single is “Pop Music” which will feature a B-side dub-mix by the Mad Professor of “Watching The Sunset”. The self-titled album Jack Adaptor is out now.

The first single from the self titeled album is “No Logos”, a full blast of melody and attitude plus a crisp shortened Phil Vinall remix, who made his mark with production and mixes for Placebo, Radiohead etc. The second single is “Pop Music” which will feature a B-side dub-mix by the Mad Professor of “Watching The Sunset”. The self-titled album Jack Adaptor is out now.

What other people have to say about the long player Jack Adaptor:

“An ace album of cutesy beats to blow away the cobwebs of evil.” Vic McGlynn (BBC 6 Music)

“You might remember the rather nifty band, Family Cat? Good, now forget them, because Jack Adaptor may have a couple of ex-cats in the line-up, but they’re doing some weird n wonderful things with electronica, scratch, pop, real tunes and what a German critic called “very nice harmonic singing”, the same critic went on to say that the songs of Jack Adaptor “deals with all things we don’t need and don’t want.” Sound too good to be true, eh? Check ’em out, kids, check ’em out. Nick Miller (Unpeeled)

“Wave after wave of pleasure. I can’t wait to spin it again.” Miles Hunt (The Wonder Stuff)

“Jack Adaptor deliver on their self-titled debut album an advantageous mix that will captivated you without question. You will only find more to explore in a haystack.” Bernd Seidel (Intro)

Be the first to review “Jack Adaptor “No Logos”” Cancel reply 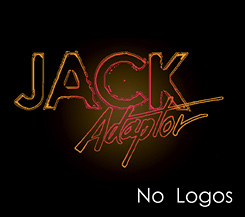