Chris Harford “Looking Out For Number 6”

There‘s no denying Chris Harford has been around the block a few times. No need to either. In fact, when it comes to writing worthwhile songs, having (had) a life will come in very useful, which is exactly why Chris Harford is well known in and around Boston, Philadelphia and New York for his three hours-plus marathon gigs backed by whoever happens to be in his Band of Changes at the time, pulling peach after peach from the fruitful branches of a songwriting career that goes back to the early eighties when he first found indie fame as part of East Coast pioneers Three Colors.

Since then, Harford, who is equally prolific as a painter, has recorded no less than seven solo albums, amongst them the widely acclaimed „Be Headed“ (1992) which featured guest appearances from the likes of Richard Thompson, Loudon Wainwright III and The Proclaimers as well as Harford‘s old musical chums Ween, whom he had helped to get signed to Elektra back in the days when big labels were identifiable by more than just their stationery.

For his newest record „Looking Out For Number 6“, Chris Harford revived this old alliance by getting Dean Ween aka Mickey Melchiondo to produce the album. Between them, they soon developed their own creative routine. Most of the songs were written on the day of recording. In the morning, Harford would find himself at the public library in Lambertville, New Jersey, working on lyrics. By early evening he would take his new song to Fountainhead Studios in New Hope, Pa., to have it recorded and mixed by 9.30 pm the same night, allowing no time for second thoughts.

“Mickey and I would meet at the studio in the evening“, Harford recalls, “I would show him the skeleton of the song on guitar. He would listen, smoke his cigarettes, his mind racing. He would make suggestions, arrangment-wise, feel-wise, we might play it together once or twice on the guitar. Then he would say ‘Okay!‘ and sit behind the drum kit. I would plug in an electric guitar, he would walk back into the control room, hit record on the machine and walk back to the kit. Most often he would play the song on drums in one take. We would return to the control room. If he felt like he knew the chords well enough he would play bass, again, in one take, or I would play it, (in two takes). Then I would sing it, then he would add a lead guitar, then we would mix it, and then it was time to go to the bar, or watch sports on TV and talk and listen to records.“

As a result of this condensed and immediate way of working, listening to „Looking Out For Number Six“ now seems to Harford “like listening to someone else, which is weird, kinda cool“. He can‘t even quite tell if a song like the „The Glider to the Queen“ reflects his personal experience of 9/11 (“It‘s interpretive, even for me“), but he does remember how the atmospheric vibes of the track came about: “The front door to the studio was open, and a heavy summer lightning-thunder-rainstorm came upon us and made it to the recording. At first the rumble of the thunder was too much drama, particularly next to the lines about buildings coming down, but since it happened naturally and in the moment we left it.
I had met George, the violin player, at an open mike at the bar (John n’ Peters, New Hope, Pa.) a few weeks prior. He was an angry youth, maybe 21, a big tattoo on the back of his neck, dressed in hip hop clothes. Mickey thinks he’s black. I think he’s white. Anyway, I convince him to come around to the studio and he plays what you hear in one take.
We recorded two more takes just for kicks but he had it from the git-go. I haven‘t seen him since. I heard he left town to join Yanni’s band. For real.“

„The Glider to the Queen“ is not the only moment of intimate emotional drama on a record which features such unadulterated paeans to break-up and despair as „I Don‘t Need You Anymore“ and „Pain is Good“, while lines like „Rip up the paper / Give away what we bought / For this moment is all we‘ve got“ resonate with a healthy disdain for the vapid consumerism that pervades the era of the post-dot.com-bubble-low-interest-shopping-spree.

Tellingly, the two songs on the album that strike a more optimistic note are both exceptions to the spontaneous concept. The possibly CSNY-inspired “Teach Me“ (with a cameo appearance by Gene Ween on backing vocals) was written six months in advance, while “To Understand You“ gives a new musical setting to a lyric that had been knocking about for 15 years and was first used ten years ago in a band called Angeldust featuring Harford, Ween associate Andrew Weiss and soul prodigy Sharief Hobley.

While “Looking Out For Number 6“ is largely the work of Harford and Melchiondo as a two-man-band, musically they still cover a wide range of dynamics, from the starkness of the acoustic songs via the psychedelia of “What We Do Not Know“ to the Hüsker Dü-like anthemic zest of “Render Me Still“. At just eight tracks it is also, quite intentionally, short.
“I have to give credit to Mickey for knowing when enough was enough“, says Harford.

For Harford the painter and graphic desiger, the fact that he has not done the sleeve artwork or the illustrations seems to have a somewhat paradoxical kind of symbolic relevance.
“It helped me to let go of this record in all ways. To let Mickey’s vision be seen through. He titled the record. He engineered and produced it. He decided to have Andrew remix it.
He knew a guy who could do the art quickly and I trusted them. To simply focus on the songs, that was my job, how to write, play and sing the songs. That was it.“
So do his songs and his paintings inhabit separate parts of Harford‘s head?
“In my head they live in the same realm“, he explains, “I can‘t seem to do both in the same time period however. When I paint I become absorbed, and it will last for a month or two, usually getting ready for a show. I seem to thrive on the deadline, but the images and the feeling they provoke come from the same desire to share a similar emotion in the songs. So the moods may be similar, if that makes any sense. Mickey’s encouragment to write songs and record them that same day was a new challenge for me. One that has since refreshed and informed my songwriting. Let it happen in the moment and protect its simplicity. Don‘t over analyze the process or the content. Just do.“

Side A:
What We Do Not Know
This Moment Is All We’ve Got
I Don’t Need You Anymore
Pain Is Good

Side B:
Render Me Still
Teach Me
To Understand You
The Glider To The Queen 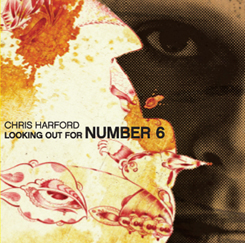