Every now and then, you come across a record like “Road Rail River” that is so utterly divorced from the endless cycle of reinvention which, in pop terms, passes for evolution that all attempts at carbon- dating its component parts seem hopelessly futile

While singer and lyricist Paul Frederick and multi-instrumentalist/producer Chris Cordoba aka Jack Adaptor are happy to attest that their music deals in “romanticism and disillusionment”, they won’t even go so far as to distance themselves from whatever current movement it might be that they certainly wouldn’t be a part of.
And listening to the album that they have crafted with the help of engineer and occasional musical collaborator Mat Hempell, it’s hard not to see their point.
The perennial question „Who can shout loudest“, which serves as the title for one of Jack Adaptor‘s more uptempo tunes*, remains decidedly unanswered by their subtle, light-footed arrangements. And this, by the way, is the only hint of irony that you will detect on this deeply heart-felt record.

Following on from the highly idiosyncratic mix of styles that made Jack Adaptor‘s self-titled debut such a wonderfully weird affair, “Road Rail River“ comes from a completely different, if equally intriguing place. “If you aim for the sky, you might reach London“, sings Frederick on “Volume“, while the deceptively lazy twang of Chris Cordoba‘s guitar takes you way down South – and we‘re not talking Kidbrooke… “Sonically, it‘s an American sounding record,“ says Cordoba, “‘cause all the roots of great popular music are from America, really.“

But just as Cordoba‘s Sun Studios-inspired sounds transport you to some clandestine British expats‘ hideout in the middle of Memphis, Frederick drops some poignant references to London life such as the park-keeper throwing him out of Bunhill Fields cemetry (where, incidentally, William Blake is buried) in “Everyone Talked About Us“, or hopeful resolutions scrawled on the back of his pay packet („Pay Day“). „I used to write songs on the backs of envelopes,“ explains Paul Frederick, „I tend to find that my lyrical ideas stretch as far as the thing I‘m writing on.“

Meanwhile, as Cordoba takes over on lead vocals to the moody shuffle of „Waiting My Time“, outside on the sun-drenched corner of 7th Street we glimpse the stooped figure of a teenager with a „heart made of tin“ who dreams of his own „Yellow Mustang“ while trying to put the hurt of his (inevitably lost) first love behind him: “I‘ve put it about that I‘m single again / See what tomorrow will bring.“
It‘s just one of those simple but spot-on stand-out lines which crop up all over this movingly atmospheric record. It all ends with the beautifully stark, piano-driven title track “Road Rail River“, and (as you press „Repeat“ one more time) starts again with the vaguely sinister childhood reminiscences of „Chocolate Malted“, a tribute to Angus Pope, the actor and close friend who passed away in 2001. “Whenever Angus would want to escape the world and go back to his childhood he would go back to his mum’s house and have a ham sandwich and lie on the couch for a week,“ says Chris Cordoba.

Jack Adaptor have been there. “Road Rail River” is really the next step for Jack Adaptor after having remixes released by the Mad Professor and Phil Vinall, airplay on BBC and XFM in the UK, having a number one radio hit in Holland and a top five in Austria, touring with Maximo Park… between Paul Frederick‘s early glory days in The Family Cat and their listening sessions in Mat Hempell’s Rover Metro, they‘ve “wasted so many dreams it‘s not true“. But in the end, even the disillusionment pays off, as every dream wasted is another ounce gained in the deep core of humanity that pervades Jack Adaptor’s songs 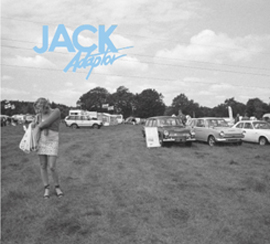