Damien DeRose, (R.I.P.) was the talented singer and songwriter behind Peasant, did release his third and most complete album “Bound for Glory”in 2012. The follow up to the critically acclaimed and fan favourite “Shady Retreat”, “Bound for Glory” is a collection of deep and diverse tracks that reveal new layers in this prolific artist.

Along with Spin Magazine, Daytrotter, CMJ and others, NPR raves, “when armed with a guitar, DeRose makes music that beckons and calls out, as if demanding to be heard. DeRose also has a secret weapon: a voice that seems to expose his very soul.” Magnet Magazine adds “DeRose’s vocals float above acoustic guitar melodies, evoking the lyrical eloquence and delicate arrangements of Rogue Wave and the late Elliot Smith.”
“Bound for Glory’s” sharp observations and thought-provoking lyrics are made addictive when mixed with its easy, lush, and dreamy instrumentation. From the album’s gentle hypnotic opener “Bound For Glory,” to the solo confession of “Doesn’t Mean,” along with the joyful spring of “The Flask” and the sensual chugging of “Girls,” “Bound For Glory” will captivate the listener and hold their attention from beginning to end.

Brooklyn Vegan perfectly states “It’s a good feeling to come across an artist you instantly like, sort of by accident. That happened to me with Peasant a few weeks ago when I randomly selected his CD.”
DeRose, now 25, has been actively releasing records for the last four years and has toured extensively with the likes of Cursive, Deer Tick, Albert Hammond Jr. and Steve Earle as well as a headline tour through Europe.

His new album “Bound For Glory” has received a lot of attention in the UK with BBC 6 sessions with Mark Riley and Festival performances in 2012 as well as MTV Hive sessions in New York.  All the singles from the album got major airplay at the BBC, supporters include:  Steve Lemacq, Tom Ravenscroft, Lauren Laverne, Gideo Coe, Dermont O’Leary and Chris Hawkins. In Germany the album charted at college radio in the TOP 20 as well as on specialty radio in the United States.  Damien DeRose’s music from the album also got sync placements at Private Practice, Parenthood, The Good Wife, Emily Owens M.D. And Arrow…all major network shows in the U.S.

Be the first to review “Peasant “Bound For Glory”” Cancel reply 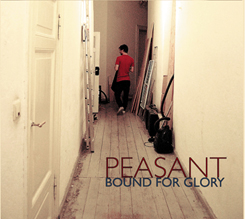