“The Moons’ new album became the soundtrack to the final week of the Tour de France in my room. It’s the best Moons album yet.” Bradley Wiggins
Produced by Stan Kybert (Oasis, Massive Attack) and recorded over three weeks at Edwyn Collins’ West Heath Yard studio, Fables of History brims with tight harmonies and shimmering layers of guitar and organ, and is laden with orchestration reminiscent of Love or Mickie Most-era Donovan, but with a driving beat.

Fronted by singer, songwriter and guitarist Andy Crofts, The Moons possess an incandescent style of pop underpinned by a timeless British tunesmith sensibility. With Crofts’ gift for exquisitely fine-honed melodies, The Moons see upholding the tradition of classic British songwriting as their sacred duty. “A little hook just isn’t enough,” asserts Andy (the man behind the Hammond organ in Paul Weller’s band). “We look to our icons to craft the perfect song”.

Lauded by Paul Weller (who made a guest appearance on album track Something Soon) The Kinks’ Dave Davies and The Zombies’ Rod Argent, The Moons have also supported The Coral and Mystery Jets, as well as Liam Gallagher’s Beady Eye, who handpicked the band for a series of sold out arena shows across Europe.
Not just musician’s musicians, The Moons even have a major celebrity fan in Bradley Wiggins (the Tour de France and Olympic gold winning cyclist) who recently revealed that his soundtrack during the final week of the Tour De France was an advance copy of Fables of History. “I like The Moons,” affirms Wiggins. “They’re a real good little group. At the moment there’s so much good music out there that’s British, and I like that.” A longtime fan of The Moons, Wiggins has also struck up a friendship with Andy Crofts: “Bradley likes his music. It’s great to know he’s supporting The Moons.” 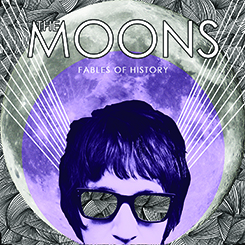 You're viewing: The Moons “Fables Of History (second edition)” £5,50
Add to cart